Be brave, and you will get what you want. Take a step and you will decide your path. Wise man said – “Successful people have one thing in common- They go up and further.”

Safe-T became my true friend in the meantime, we shared the same love- music. He is vinyl fanatic, so you can imagine with what kind of guy I had to deal with 😀 I remember once I came to his home and he was cleaning his vinyls.. I have to be honest, I never knew how much about vinyls until I met Safe-T. I was just a consumer like all the other people who likes music. I like that organic sound of vinyl before the song starts, and I like the measure of the covers and bootleg, and that’s all. But, the real vinyl lovers are something else. By my opinion, people with such kind of passion are special, and Safe-T was the true example of that kind of a people.  Just look at this picture and everything will become clear to you 😀

Safe-T was the guy who always supported me and pushed me to move forward. I didn’t had the guts to quit my job and start to DJ, though I really wanted to do that and I felt it as a very nice solution how to make a compromise between job and pleasure.

It was a summer of 2016. I just came back from my vacation when Safe-T called me. He asked me if can he give my number to the agent who has the DJ job for me. I was so excited, finally a chance to change the things. I got the call from Wael, the agent. The negotiations made some progress, I was almost sure that I might get the job as a resident DJ in the 5 star restaurant in Abu Dhabi. I was still working in the school as a piano teacher and everything seemed to be going fine… Until I one problem came up- The restaurant wanted me to start by the 1st of September, and my notice period was 4 months in the current company (it was a beginning of August)…

Few days later, I just snapped! I couldn’t bear my life anymore! I went to my boss and resign immediately.. I even forgave his debt to me that he can cut off my notice period and that I can go as soon as possible..

After few days, I moved from the company accommodation. With almost no money in my pocket and 2 bags from my room…

I was on the street.

Fortunately, my best friend offered me her couch in the living room until I solve my situation.

The clock was ticking, and I didn’t have any contract from the agent in my hands. He called me on Thursday to tell me that the management of the restaurant wants to do an interview with me. He also said between the lines that I might play something for them. When I asked him should I bring my own equipment (just to remind you, I was always playing on my controller for these few months since I started to DJ) and he said that there’s no need because they have a new Pioneer equipment which I can use.

The equipment… which I saw only on Google pictures. 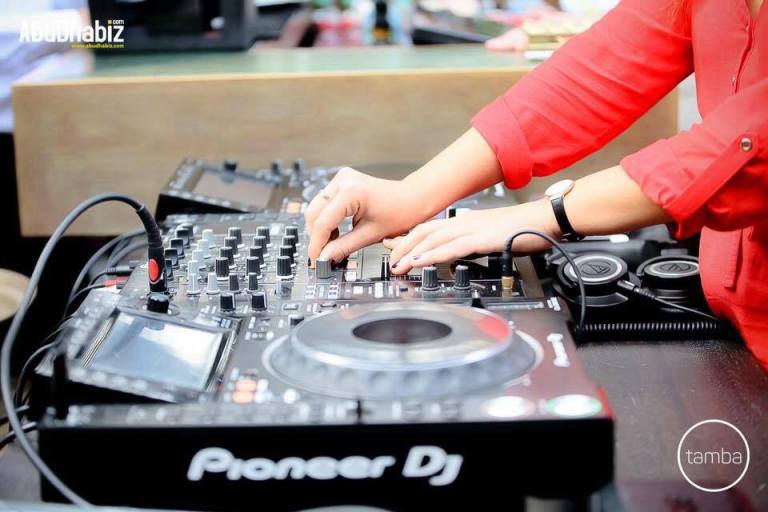 I started to panic when hang up. HOW WOULD I PLAY WITH NO EXPERIENCE ON THAT EQUIPMENT??? This was the matter of life and death! If I fail the next day, everything will fall apart! All my effort to move to Dubai, the money my parents spent to send me there, the break up I had with my boyfriend, leaving the band which I loved so much, my resignation, my struggle, the sleepless nights for this one year because of learning how to DJ, if I don’t get that job!

I called another friend for help, Joots, also a DJ, who happened to have a gig that night. He called me to the club where he was working to try to catch up the with the equipment I should use tomorrow. But, when I got there, I wasn’t allowed to come inside of the DJ booth so I needed to watch what he was doing few meters far away! It was a disaster. The clock was ticking faster and faster. He gave me his home keys and sent me to his apartment to catch up some sleep. When he came back home around 4 am, he opened the picture of Pioneer Nexus CDJs and the mixer and started to explain to me the knobs and inputs which I have to know. I was so tired that I couldn’t remember anything. Two hours later I decided to go home and to get some sleep before the big day tomorrow, and lay myself down on my own luck.

I woke up after 2 hours, get the bus and went to Abu Dhabi. All the way I was pushing myself to think positive and that everything will be just fine. “I can do this” was the sentence I was repeating like a maniac in my head. I watched the pictures of the equipment and worked on my playlist on my laptop the whole trip.

When I reached the place I started to sweat. I knew that everything is in my hands now, and I shouldn’t fail today. I came inside of the restaurant, met the stuff, they told me to wait for managers few minutes. I used that opportunity to see the equipment finally in live. I was confused even more but I tried to keep my cold face. In that moment managers came and we started to talk.

The moment I started to talk, all the fear had dissapeared! I was amazing! I had the feeling that I was someone else, that my skin has changed, that I became other person- bold, self confident professional who knows everything about her job. I gave so good answers on some of their questions like what music I would play there, how I imagine the crowd here etc.

And then, they asked me to play something for them…

The good of feeling of fear came up again, but I resisted. I kept talking about my experiences as a musician, about my plans there and how I see the place, while I was searching in secret WHERE IS THE FUCKING HEADPHONES INPUT!??!?!

I finally plugged my headphones and started to play.

My choice of music and my guts was the main reason why I got the job.